The hemp industry is booming across the United States. Hemp products like CBD oil, cream, gummies, and capsules are in high demand, with an estimated 14% American adults using CBD products. (That’s over 29 million people!)

Though the emergence of CBD products is a newer trend, hemp has a long and complicated history in this country. Let’s take a look at the history of hemp in the U.S.—when it was first grown, what its uses have been, and the legal battles that have plagued it for decades.

WHEN DID HEMP FIRST COME TO THE U.S.?

The first written record we have of hemp in the U.S. is from 1632, when the Virginia Assembly mandated that all farmers grow flax and hemp. However, hemp was grown long before that by Native Americans, who used the crop to make clothing, cord, paper, and even food.

Hemp was a major export for America in the 17th, 18th, and 19th centuries. Much of what was grown was exported overseas to Britain, where it was used for a wide variety of products: shoes, clothing, paper, cord, rigging, sails, and much more. The hemp plant fibers are exceptionally strong, and this made it an incredibly versatile crop.

WHEN WAS HEMP AT ITS PEAK IN THE U.S.?

The invention of the cotton gin in 1793 made cotton the preferred material for textiles, as harvesting hemp by hand is extremely labor intensive. Hemp remained a top crop, however, due in part to laws requiring the Navy to purchase hemp from domestic farmers and the eventual invention of machinery to reduce manual labor costs.

Hemp peaked as an industry in the first part of the 20th century, before shifting attitudes and laws began to cause its decline.

WHY DID HEMP FALL OUT OF POPULARITY?

There are three major factors that caused the decline to hemp. The first factor was the rise in synthetic fibers like plastic and nylon. Though lower in quality (and, as we now know, much worse for the environment), these products were far cheaper to produce and import than hemp.

The second major factor that caused hemp to decline was the demonization of marijuana and passage of the Marijuana Tax Act in 1937. This bill dealt a serious blow to hemp. Because it lumped hemp in with its cousin, cannabis, it became regulated by the Department of Revenue, which added a large tax on the sale of hemp. Even though this bill did not outlaw the production of hemp, it made it much more difficult and expensive for farmers to grow it. As a natural reaction, its production severely waned.

Hemp experienced a brief resurgence during WWII, when the U.S. government reversed its stance and once again urged farmers to grow the crop—even offering a subsidy for them to do so. The reason? Japan had cut off imports of hemp from the Philippines, and it was needed to produce items like rope, cordage, and cloth. Unfortunately, as soon as the war ended, the government once again stopped its support of hemp, leaving farmers in the lurch.

The third and final blow to the hemp industry came in 1970 with the start of the War on Drugs. The Controlled Substances Act was passed, regulating all cannabis and classifying it as a Schedule 1 “controlled substance.” The bill used the same definition of cannabis from the 1937 Marijuana Tax Act, which included the hemp plant.

WHEN DID HEMP’S COMEBACK BEGIN?

After thirty years, the first reprieve for hemp came with a 2004 Court of Appeals ruling, which stated that the DEA could not regulate certain parts of the hemp plant under the Controlled Substances Act—sterilized hemp seed, hemp fiber, and hemp seed oil. This ruling allowed these to be imported and used in products.

Another win came with the passage of the 2014 Farm Bill. This bill allowed hemp to be grown for pilot and research programs by state departments of agriculture or universities.

The 2018 Farm Bill really allowed the hemp industry to begin booming again. It did what should have been done back in the 1930s—it defined hemp as separate from marijuana. This removed it from the Controlled Substances Act, allowing it to be produced commercially in the U.S. In addition, it made hemp federally legal nationwide (states still have their own regulations and laws independent from this), which opened the door for CBD products like our Full-Spectrum Hemp Extract.

TIMELINE OF THE HISTORY OF HEMP IN THE U.S.

We know—that was a lot of information! That’s why we created a handy hemp timeline graphic for you. Check it out below! 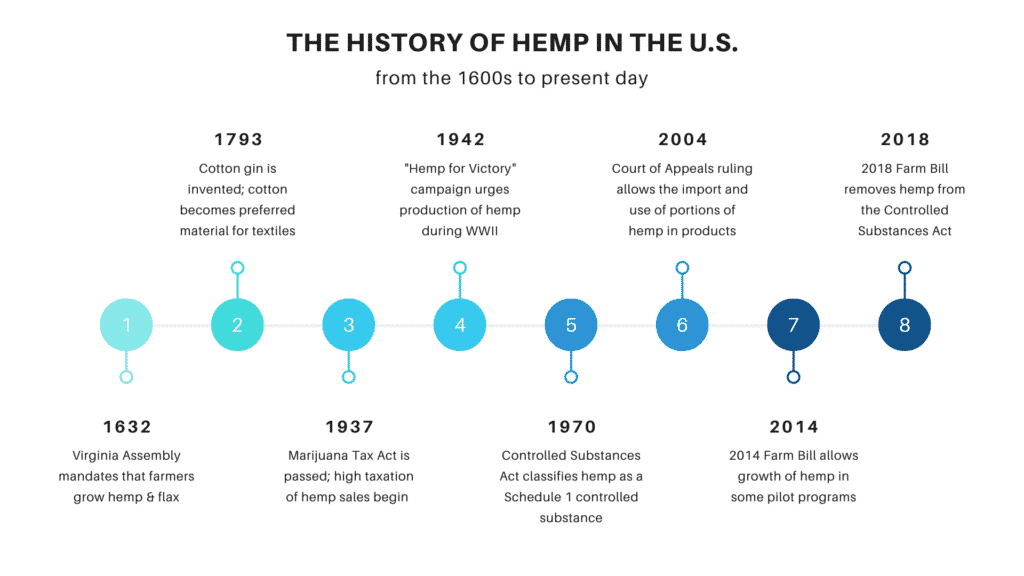 Rational Hemp is regulatory-compliant and contains trace levels of THC under 0.3%. While we know of no instance where a drug test came back positive after using our Hemp Extract, we cannot guarantee this result. Speak to a physician before using CBD if you are pregnant, nursing, or taking prescription medications.

Enjoy our sitewide sale for 30% off our products and give it a try for yourself.

Should You Try CBD Oil?

Even if you haven’t tried CBD oil, chances are you’ve heard of it. According to a Gallup poll, 65% of all American adults are at least somewhat familiar with CBD or CBD products—whether oils,...

END_OF_DOCUMENT_TOKEN_TO_BE_REPLACED

Which is the Best CBD for Your Wellness Routine – Oil!

There are a lot of CBD options out there. Even once you’ve found the right brand and type of CBD (isolate, broad, or full spectrum), the choices aren’t over: now you have to decide...

END_OF_DOCUMENT_TOKEN_TO_BE_REPLACED

Why are CBD Oil Prices Missing from All the CBD Ads in Your Feed?

There’s a dirty little secret in the CBD industry, and it’s this: CBD oil prices are way too high, and customers are getting massively overcharged. A few big brands tend to dominate advertising and...

END_OF_DOCUMENT_TOKEN_TO_BE_REPLACED

Is CBD Legal in Your State?

Interested in trying CBD but unsure if it’s legal in your state? We’re here to help. Between federal and state laws, it can be confusing when trying to understand whether CBD products are legal...

END_OF_DOCUMENT_TOKEN_TO_BE_REPLACED

CBD for Wellness: How to Choose the Right Product for You

Using cannabis and CBD for wellness isn’t a new trend, but it’s a growing one. But what is “wellness” really, and how do you choose the cannabis or CBD product that will best suit...

END_OF_DOCUMENT_TOKEN_TO_BE_REPLACED

How to Read a Certificate of Analysis (COA)

END_OF_DOCUMENT_TOKEN_TO_BE_REPLACED

What Are Terpenes and Terpenoids?

END_OF_DOCUMENT_TOKEN_TO_BE_REPLACED

Grassy. Earthy. Bitter. These are all words you’ll hear people use to describe what pure, undiluted CBD oil tastes like. Like good, strong black coffee, it may take some getting used to. If you’ve tried other...

END_OF_DOCUMENT_TOKEN_TO_BE_REPLACED

How to Take CBD Oil – Tips on Efficiency & Effectiveness

There’s no shortage of CBD products on the market these days. With oils, topicals, soft gels, gummies, and more in the market, it can be difficult even for savvy consumers to understand which CBD...

END_OF_DOCUMENT_TOKEN_TO_BE_REPLACED

What is CBD For?

CBD is still a new market, with a lot of unknown variables. But ever since the FDA passed the Agriculture Improvement Act of 2018 (also known as the Farm Bill), legalizing CBD derived from...

END_OF_DOCUMENT_TOKEN_TO_BE_REPLACED

Why 2400mg of CBD Oil Makes A Difference

CBD oil is about creating homeostasis. You’re doing this for you, so that your body works better and you feel better. Everyone’s body is unique, and your reason for using CBD oil may not...